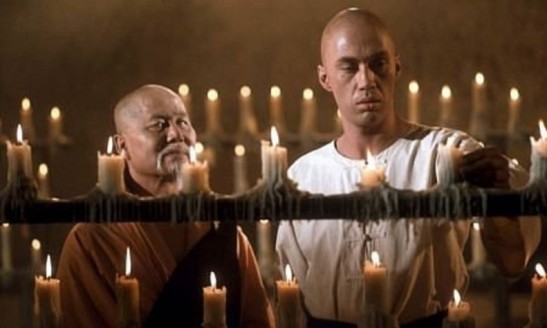 The most famous moment from the 1970s television series Kung Fu–which I designate as such because it’s probably the moment most often referenced in other media, a moment even people who have never seen a full episode of the show can recognize–is a scene in which blind Master Po, attempting to teach his pupil Kwai Chang Caine the ways of the titular martial art, holds a pebble in his hand and challenges Caine to snatch the pebble from his hand.

At the earliest stages of his training, Caine is unable to manage this feat. Po closes his fist far too quickly, and Caine is left empty-handed.

I bring this up because there are scene-stealers and there are showboats. You’ve most likely seen both at work. And there is a significant difference between the two.

I love being onstage with a scene-stealer. I do. Stealing a scene is an art all its own, and people who can do it consistently are joyous to watch and wonderful to perform with. Scene-stealing requires the actor or actress in question to not only have talent and presence, but to actually have the awareness to recognize the opportunity when the scene can be stolen. It’s impressive to watch it happen, like the prestige portion of a magic trick, when the magician shows you that he’s taken your watch right off of your wrist.

But the best part about being onstage with a scene-stealer is how generous they are with their scene partner. A really good scene-stealer will take the scene, start running away, and then look back with a twinkle in their eye and dare you to steal it back. They force you to elevate your own game in order just to keep up with them. There is exhilaration in that, in having somebody push your limits for you, and at the end of it you’re breathless and achy and looking forward to trying it again.

That’s not to say it’s always possible to steal a scene back. Sometimes there is no such chance to do so. My point is that a scene-stealer isn’t really trying to outrun you so much as they are trying to set a higher pace and standard for the moment, and if they can’t do so without tripping you up, they won’t do it at all.

A showboat, on the other hand, is playing to an audience for personal gratification. The showboat got a positive response to something they once did and are now determined to transfer that action to every scene they perform, even if they have to push you into traffic to get there. In the context of the old theatrical anecdote about asking for the butter instead of asking for the laugh, the showboat is not only asking for the laugh but is grabbing the audience by the collar and slapping them repeatedly until that laugh occurs. I tire, quickly, of being in a scene with a showboat–an actor who doesn’t listen, who doesn’t parlay, who is out there solely for the satisfaction of hearing that bell go off and knowing that a food pellet has been dropped into the cage.

And here’s the hard truth about that–eventually, people will notice that the showboat is trying too hard, and the laughter or the applause will go away. And the showboat will find themselves wondering why their dependable tricks are no longer successful in producing their treasured endorphin rush. And quite possibly they’ll also wonder why nobody wants to be onstage with them anymore.

The scene-stealer sees the pebble in Master Po’s hand, observes the whole of Master Po, focuses their energy into their body and focuses their mind onto the task, and then with the precision and speed of dry lightning, snatches the pebble. And then has the decency to bow to Master Po for the humble lesson.

The showboat has already thrown Master Po to the ground and is screaming obscenities at him while attempting to wrench open the fingers of Po’s mighty fist. And yes, they might get the pebble this way, but it’s hard to respect them for it afterwards.

I’ll conclude by saying that quite possibly the worst thing one can do for a showboat is tell them they’re a scene-stealer. It reinforces positively a negative habit and fortifies the fortress of ego in ways that only truly powerful ballista will ever be able to penetrate. Attempting to disabuse a showboat of the notion that they are a scene-stealer will lead to years and years of denials and indignant declarations of envy.

At the same time, the worst thing one can do to a scene-stealer is charge them with showboating. Because it will likely discourage them from utilizing their natural talent and grace, and all that one has left is a dusty pile of lost potential.

That will be all, Grasshopper.

This entry was posted on May 24, 2008 by bilaldardai in Education, Performance, Plays, Society, Television, Thoughts.