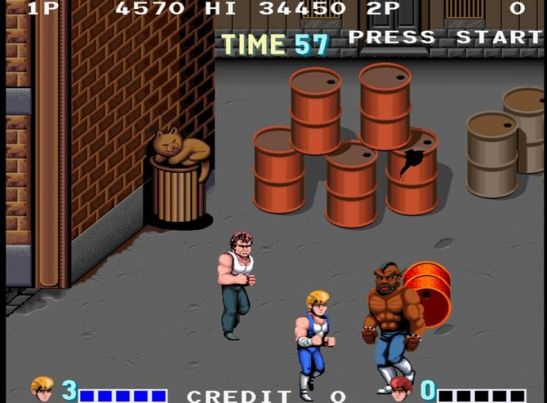 I sat in my babysitter’s living room, a child of five, playing blocky, slow adaptations of the Smurfs and the third Rocky film on an ancient television. I worked quickly but accurately through my assignments in the school computer lab so I’d have 5-10 minutes at the end of the period to wander through a text-based adventure. My pockets were always full of bronze tokens, unspendable anywhere except for the red-neon rimmed arcade at the border of Downers Grove and Westmont. I never beat the first Super Mario Bros. or the first Mega Man but I did defeat several of their sequels; I completed with blistered thumbs and arrested breathing the original Ninja Gaiden trilogy and Battletoads without ever purchasing a Game Genie. I have dreamed in blocks of Tetris and Konami codes and the flying kicks of Double Dragons and awoken realizing where the final boss’ weak spot must be. I have pulled all-nighters with members of my dorm floor firing rocket launchers across Marathon arenas. I have archived and easily accessible in my mind all of the music one hears while one rides a horse across the mountains of Hyrule, when one faces off against ancient evil wielding little besides a studded bullwhip. I have spent years of my life in imagined worlds as other people and returned with new perspectives on storytelling and art, and I have defended ferociously the right of fantasy, have set down with exasperated prose yet another argument against the notion that violence in gaming alone causes violence in the world.

I am a child of the arcades. And the rabid, ugly, entitled boy-children that make up the GamerGate terrorist group do not speak for me.

This entry was posted on October 14, 2014 by bilaldardai in Essay, Games, Society.