The thinnest of blue lines. 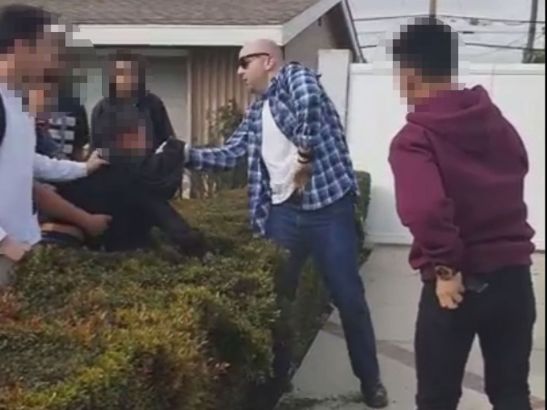 One of the most important details in the video showing a confrontation between an off-duty Anaheim police officer and a group of teenagers is the one that isn’t in the footage itself.

This man was sitting on his porch with his gun loaded and in his waistband, and he initiated the argument over somebody stepping on his lawn. Whatever happened afterwards–and we can parse and judge the tone and harshness of words spoken, the method and severity of the officer holding onto the teenager, the way another of the group rammed into the officer–we mustn’t forget the circumstances that existed beforehand.

This man was off-duty, and at home. He chose to spend this time assuming a situation would occur in broad daylight that would require him to brandish his firearm. He then encountered a moment of perceived offense and actively participated in its escalation until such point as he felt he was justified in drawing his firearm. A firearm that he kept loaded and in his waistband for the purposes of sitting on his porch and enjoying his day off. And then, purposely or not, the weapon discharged, and it’s sheer luck that nobody was killed by the bullet.

Even if one were to concede the narrative that our police forces are composed of our finest and bravest citizens, under what criteria would this officer in Anaheim meet that definition?

This entry was posted on February 23, 2017 by bilaldardai in Politics, Society.